Autumn has arrived… leaves change color and fall off the trees… it is the time of the harvest, the grape harvest for the making of wine…

Let me therefore present you a vessel and an object related to this topic:

A jug-shaped vessel with a Dionysiac scene

First an olpe (ολπη in ancient Greek), a jug-shaped vessel, similar to the oenochoe. Although oenochoai were more popular, both types of vessel were widely used for serving wine at symposia (banquets). This example is quite interesting as it contains a Dionysiac scene, that is to say a scene connected to Dionysus, the god of wine and ecstasy. It also links the practical use of the form (olpai were intended to serve wine) to a decoration related to the theme; however, this scene is not innocent, since it can easily be confused with others… 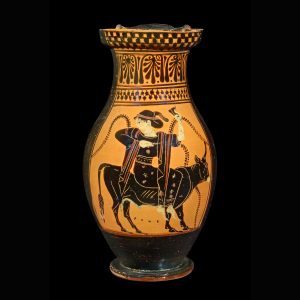 One would be tempted, indeed, to recognize here the famous mythological episode of the bull carrying off Europa on its back. In fact, the iconography linked to this myth shows the bull “galloping” at a certain speed, in an environment that suggests that the figures are flying over the sea, which is not the case here, since all the represented elements combined together clearly belong to the Dionysian universe.

For this reason, one would rather identify the scene decorating this olpe as that of a maenad riding the god Dionysus disguised as a bull, in the context of a Dionysian procession, during which music played an important role (the maenad plays castanets). Several stylized ivy or vine stems adorn the background of the decor. Such details, sometimes associated with rocky elements, may suggest the entrance of a bacchanalian cave. Dionysus being the god of euphoria and ecstasy induced by wine, the “ceremonies” would take place within the framework of hidden and initiatory cult services, held in caves and preferably at night. His worship took place among insiders, known as satyrs and maenads, grouped under the name of a thiasus, or Dionysian procession.

Here is an example of a finely carved, bronze satyr. It is worth noting here the athletic, carefully modeled shapes… 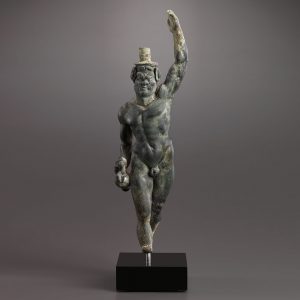 Living in the woods and hills, satyrs usually have a human form, but they are also endowed with animal features, such as the ears and tail of a horse. They may sometimes have goat’s hooves; this might have been the case in this example, given the presence of the tenon indicating a foot made separately and then added, an element that links them more to Pan, the god of the wild.

The satyr holds a small trefoil oenochoe in his right hand; in the same spirit as our olpe… The circle is complete!

As soon as humans were able to think, they consistently […]

Glass, a luxury and exquisite material, whose technical virtuosity reached […]