The Modernity of Greek Tragedy

Athens, 6th century B.C.; Pisistratus the tyrant, who then reigned supreme in the Greek city, institutes a tragedy competition during the Greater Dionysia, celebrated annually in early spring. The plays of Aeschylus, Sophocles and Euripides enjoy a considerable success, attracting a large audience in the amphitheaters. Over 2,000 years later, […]

In the 5th century ancient Greece, the month of Poseideon – which corresponds to our month of December – was the occasion to celebrate the Rural or Lesser Dionysia, a festival that took place in various demes (villages) of Attica. With the City or Greater Dionysia, celebrated in Athens in […]

Paris, City of Culture and Exhibitions

Nowadays, Paris has many nicknames such as the City of Light, the Capital of Fashion and Design, the Capital of Gastronomy or of the Art of Living. All these references actually tend to reduce Paris to a flashy, glittery city, which limits to the Champs-Elysées and to the annual shows […]

Present in all cultures since very remote times, the vine – or vitis vinifera – has always been closely linked to the history and life of humanity. Its fruit, the grape, was first consumed as food by the Paleolithic societies living on the shores of the Mediterranean, before being used […] 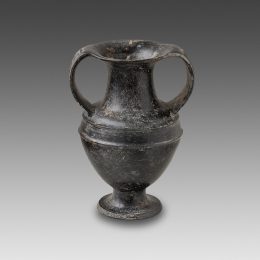 Autumn has arrived… leaves change color and fall off the trees… it is the time of the harvest, the grape harvest for the making of wine… Let me therefore present you a vessel and an object related to this topic: A jug-shaped vessel with a Dionysiac scene First an olpe […]

Ideas of the Past

As the archaeologist and historian R. Turcan documents in his recently released study on the perception of the past in classical (and especially Roman)* antiquity, the concern for “what it was” was already present in ancient societies, especially in times of crisis or perceived by contemporaries as pivotal moments between […]

The Art of Collecting

It all may have started with a few shells collected on a beach, or with smooth, particular pebbles, or with pieces of wood carefully selected. It took place by a river, or in a forest… The Art of Collecting is Universal One thing, however, is certain: the act of collecting […]

As soon as humans were able to think, they consistently […]

Glass, a luxury and exquisite material, whose technical virtuosity reached […]